Is Russian MC-21 Good Enough to Join the Oligopolistic Market? 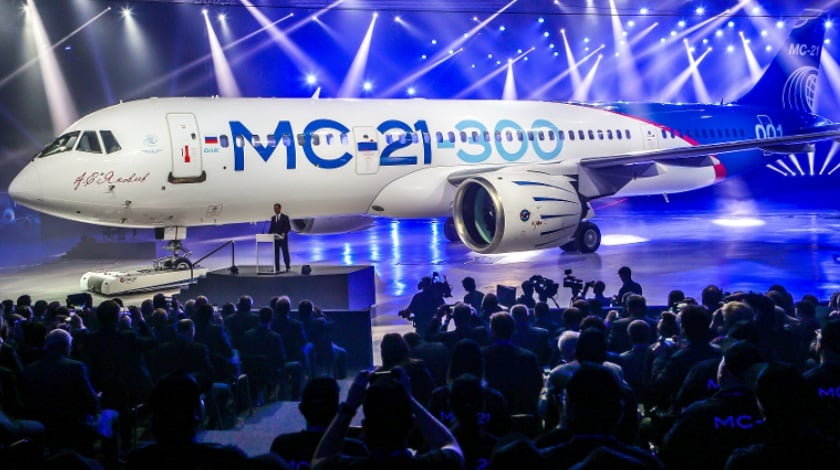 The single-aisle airliner market is getting more crowded. On 8 June Russia’s United Aircraft Corp. unveiled the next domestic airliner which is believed to achieve remarkable success in penetrating the global commercial aviation market.

Russians call the MS-21 their biggest investment in the revival of Russia‘s commercial aviation industry. With composite wings, Pratt & Whitney geared turbofan engines, a full fly-by-wire system and a bit wider cabin than the Airbus A320, the MS-21 appears to become a serious competitor for both Airbus and Boeing.

The promising project to be more independent

The MS-21 has been teased for several years. United Aircraft Corp. has finally unveiled the production variant of the airliner during a ceremony at the MS-21 factory in Irkutsk.

The event was attended by such an important person as Russian Prime Minister Dmitry Medvedev, who even gave a speech and promised to support the future airliner.

The first experimental machine unveiled in Irkutsk is a basic version of MS-21-300. The modification is designed with passenger capacity of 163-211 seats depending on further changes and will be certified by the authorities first. The first prototype is traditionally used for the flight test, however the second prototype of the MS-21, which can be found in the Irkutsk‘s final assembly line, has been already built, too.

According to representatives of the United Aircraft Corporation, it is planned to deliver the second prototype for static tests in September. Also, there are two more prototypes at the different stages of production: one meant for the flight test and another one – for the resource test. Currently, the assembly line of the fuselage panels and tail are following rigorous running-in procedures to be prepared for mass production.

Moreover, there will be additional classrooms as long as it is expected to accelerate the adaptation of employees to the work with the components of the MS-21.

Prime Minister Dmitry Medvedev said that the first test flight of the MS-21 airliner is scheduled for the next year. Correspondingly, the representatives of the „Irkut Corporation”, which is developing the aircraft, explained that time left until the end of this year will be used for ground checks of all the systems and preparation for the first test flight. Certification of the MS-21 is expected to be held in accordance with Russian and European standards.

Meanwhile, Irkut aims to obtain the certificate for MS-21-300 from Russian aviation authorities in 2018. A year later it is planned to complete the certification in Europe with EASA approval.

“Kommersant” reported that by 2018 “Irkut” plans to assemble four single-aisle aircraft. By 2020, the production rate is expected to increase up to 20 airliners per year and by 2033 – to about 70 airliners. Therefore, the existing capacities allow to produce only ten airliners over the year.

The smaller version to be available soon

The assembly of the first prototype of a shortened version of the new Russian aircraft MS-21-200 – will begin in 2017.

Now Yakovlev Engineering Center, which is a part of the Irkut Corporation, is developing design documentation for MS-21-200. Initially, even a smaller variant of aircraft, MC-21-100, with a capacity of up to 132 passengers, was proposed, but in order to avoid competition with the Sukhoi Superjet 130 it was cancelled.

The new airliner will be offered to customers with two types of modern engines. First of all, MS-21-300 will be certified with PW1400G engines from the Pratt & Whitney company located in the US. It is important to mention that particularly this engine family, which is unique with it‘s ultra-high bypass ratio and geared drive turbofan, is used by such MS-21’s rivals as Airbus A320neo, Bombardier Cseries, Embraer E2 and Japanese Mitsubishi MRJ.

Russian hands along with foreign brains

Like the previous Russian aviation project – SSJ 100, the MS-21 was created in broad international cooperation. The program was developed by such leading global suppliers as Honeywell, Thales, Elbit Systems, Goodrich, Zodiac Aerospace, Eaton and Meggit.

The foreign suppliers opened up a possibility to use the most advanced technical solutions and make it understandable as well as attractive to foreign markets.

At the same time, foreign companies have participated not only as developers of subsystems, but also as suppliers of the equipment needed to produce and test the aircraft, engines and components. For example, the production of MS-21 at the Irkutsk is equipped with Broetje, Aerotec, FFT and Kuka. Despite the fact that automatic assembly stations in Irkutsk were installed by Duur Systems from Germany. A supplier of machine tools for balancing PD-14 engines was SCHENCK RoTec.

Moreover, Hamilton Sundstrand have announced they signed a $2.3 billion deal with Irkut to supply systems for the MC-21.

Irkut has also selected Rockwell Collins and its Russian partner Avionika to supply the MS-21’s avionics.

Goodrich along with Aviapribor have secured the mandate to develop an integrated control system for the MS-21. The Interior will feature furnishings from Zodiac Aerospace, coordinated from C&D Zodiac in Huntington Beach, California.

Orders without any well-known aviation players

According to Irkut’s vice-president of marketing and sales, Kirill Budaev, the total commitments for MS-21 have raised to 280 aircraft, including 192 firm orders.

Fifty of them have been ordered by the Aviakapital Services leasing company (a subsidiary of the Rostec Corporation) for Aeroflot and 35 more airplanes, powered by PD-14 turbofan engines, for governmental customers.

Also, Fifty planes have been ordered by Ilyushin Finance Co.; six of them will be leased to Transaero, though Transaero bancrupted in 2015, and 10 airplanes – to Red Wings.

Thirty more airliners have been bought by VEB Leasing; 10 of them might be leased to UTair Aviation and 6 planes to Transaero.

In addition, Irkut currently has a single-source contract with IrAero for the delivery of 10 planes, plus an agreement with Sberbank Leasing for 20 aircraft, with the latter agreement to increase the order to 195 airliners. Ilyushin Finance & Co. and Azerbaijan Airlines CJSC have signed a memorandum of intent for the supply of Irkut MC-21 planes, too.

The volume and time of supplies have not been specified yet.

Undoubtedly, the MS-21 program is no less important than the Sukhoi Superjet 100 and will have a huge impact on the future of the Russian aircraft industry. In order to compete with the most powerful leaders of the global single-aisle market segment, the Russian developers have decided to to build a totally new airplane by implementing a number of promising technologies and new components.

The designers suppose that the MC-21 will be 10-15% more efficient than Airbus and Boeing aircraft in the same class and it will have a 15% structural weight efficiency advantage, 20% lower operating costs, and 15% lower fuel consumption than the Airbus A320 with an initial target price of $35 million USD.

The most important task of the MS-21 program for the coming years is to generate massive sales, as it usually poses the biggest dilemma for the Russian aviation industry. Additionally, deliveries of MS-21 will begin immediately after the ones made by the competitors. This means that it will be not easy to find a place in the market. Nevertheless, according to vice-president of Sales and Marketing at Irkut Corporation, Kiril Budaev, the company has a plan to deliver 1060 MS-21 airliners in the next 20 years. At the moment, the only direct order for 10 MS-21 has been placed by the airline “IrAero”.