Long-Awaited Boeing 777X in the Sky on Its Maiden Flight 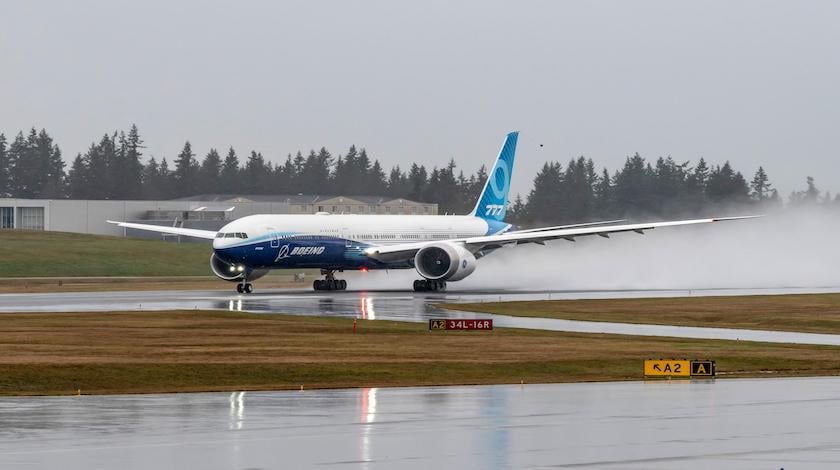 It has finally happened. After two aborted attempts due to poor weather conditions, the Boeing 777-9 has finally performed its first flight beginning the next phase of rigorous tests.

Therefore, 25 January, 2020, has joined the list of important dates in the commercial aviation history. World’d biggest twin-engine passenger jet has just departed for the several-hour test flight before landing at Boeing Field in Seattle, Washington.

The first Boeing #777X is in flight. After a few hours of flying, the jet will land at Boeing Field in Seattle, Washington.

According to the initial plan, the maiden flight was scheduled for 23 January. However, the take-off was aborted because of winds and postponed by a day, until 24 January. On this day, therefore, wind levels also prevented the 777X from leaving the ground.

After several hours spent at the end of the runway, the readying 777-9 saw a lot of commercial planes take-off and land. This, in turn, lead to endless questions as to why the Boeing plane could not fly while others could. Technical problems?

Reacting to the public concerns, Boeing said in a tweet that “flight tests, first flights in particular, have special requirements that are more stringent (like wind strength & direction for take-off) than for certified airplanes. For this reason, commercial flights departed Paine Field but the 777X couldn’t”.

The first flight of the Boeing 777X was one of the most anticipated events in the aviation world in 2020.

This maiden flight of a plane, which according to the data on the Boeing website has secured over 300 orders already, has come as a flash of excellent news for the troubled Boeing.