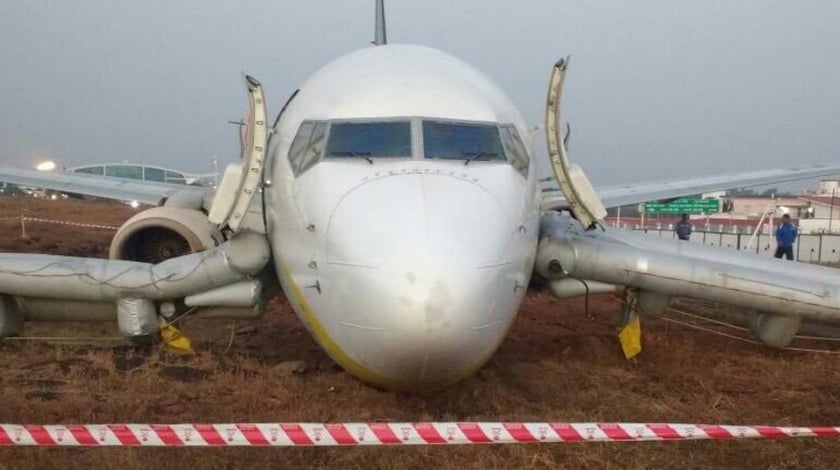 A Jet Airways aircraft with 154 passengers and 7 crew members onboard veered off the runway at Dabolim airport in Goa while aligning for take off to Mumbai early today, with 15 passengers suffering “minor” injuries during evacuation.

According to the airline, it has resumed normal operations to/from Goa and normalcy has also been restored to the operations at Goa airport. The flights 9W 475/476 are operating as scheduled. Its flight 9W 472 to Goais being operated on wide-body Boeing 777-300ER aircraft at the scheduled time, to ferry its guests to Goa.

Also, the airline stated that 7 of 12 injured guests have already been discharged after administration of first aid. The remaining 5 injured guests are currently receiving medical attention and shall be discharged once they have been medically cleared.

“The flight 9W 2374 from Goa-Mumbai skidded off the runway at Dabolim airport this morning due to a technical glitch while aligning for takeoff,” Jet Airways said in a statement.

All passengers are safe and the airport has been closed till 12.30 PM, airport sources said.

However, a few guests have sustained injuries during the evacuation process and are being provided medical assistance, the statement from the Jet Airways said. Jet Airways flight whilst taking off from HANSA runway 26 aborted take off & spun around 360 degrees. The runway will be usable by 9 AM, Indian Navy said.

“Few guests have sustained minor injuries during the evacuation process and medical assistance is being coordinated by the Jet Airways team and the airport authorities,” the airlines said in a statement.