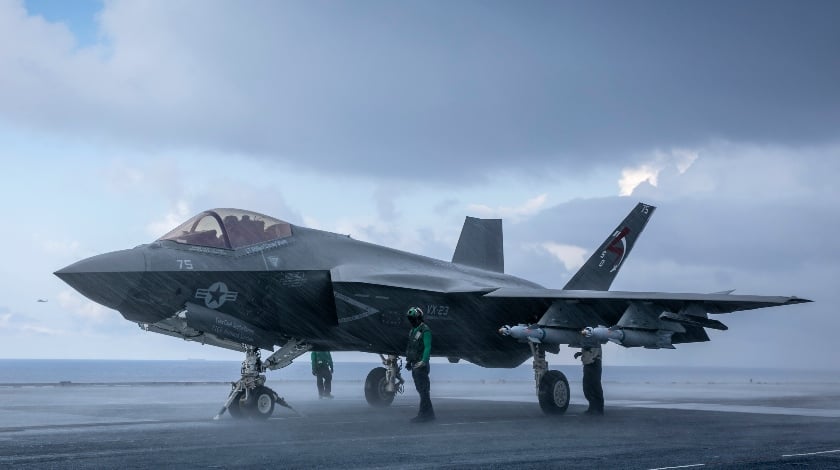 The Navy has been training with and testing high-tech adjustments to the stealthy carrier-launched F-35C’s Helmet Mounted Display to better enable targeting, sensor data viewing and pilot awareness of flight information such as airspeed, heading and altitude, service and industry developers explained.

“They are going to be the initial training squadron for our fleet for pilots flying the F-35C the future. This is the Navy’s first West Coast squadron. They will be flying the F-35C out of Naval Air Station Lemoore for years to come,” Steve Fiebing, deputy public affairs officer for Naval Air Forces, said several months ago following the planes’ arrival.

Sensors in the pilot’s Generation “3 HMD” have been improved with new firmware to better enable pilots to target enemies and perform missions at night, Navy developers explained.

The new display is engineered to add more image fidelity in lower ranges of brightness and low-light conditions; this allows for better targeting and carrier-landing ability in the darkest conditions when there is no moonlight, Navy officials explained.

At the same time, ongoing training pilots on the subsystems to prepare for operational missions also includes ongoing evaluations of the aircraft’s next-generation technology. Pilots will be training with the aircraft’s 3 HMD, among other systems, at Air Station Lemoore.

All the information pilots need– is projected on the helmet’s visor, rather than on a traditional Heads-up Display, a Lockheed statement said. The helmet also provides pilots night vision through the use of an integrated camera, the statement continued.

The 3 HMD also allows for efficient viewing of sensor feeds from cameras positioned around the aircraft. The F-35’s Distributed Aperture System streams real-time imagery from six infrared cameras mounted around the aircraft to the helmet, allowing pilots to essentially “look through” the airframe.

Both the training and the continued technology development also include efforts to refine a precision-landing technology called Joint Precision Approach & Landing Systems, or JPALs.

JPALS, slated to be operational by 2019, works with the GPS satellite navigation system to provide accurate, reliable and high-integrity guidance for fixed- and rotary-wing aircraft, Navy statements said.

The emergence of a first-of-its kind carrier-launched stealth fighter is intended to give the Navy more combat attack flexibility and attack sophisticated enemy air defenses or fortified targets from a sea-based carrier. Such an ability can allow a maneuvering carrier to hold targets at risk from closer proximity if land-bases are far from the combat vicinity.

The new stealth Joint Strike Fighter is slated to become operational by 2018, when it will join the carrier air wing and fly alongside the F/A-18 Super Hornet, E2D Hawkeye surveillance planes and other aircraft. Over the next five years, the Navy plans to acquire more than 50 of the new fighters, Navy officials told Scout Warrior.

As it prepares for F-35C deployment, the Navy anticipates that the new aircraft will deploy to any one of a number of pressing hot-spots.

Prior to this event, developmental testing of the aircraft has been focused on advancing what’s called carrier integration and carrier qualification – effort to seamlessly integrate the new aircraft into the carrier platform and carrier air wing, service officials said.

Stealthy F-35C carrier aircraft, having a lower radar signature, are expected to deliver advanced attack and air-to-air and intelligence, surveillance and reconnaissance platforms, able to perform a wider range of operations without being detected by an enemy.

The aircraft is part of a broader Navy strategy to be well equipped in the event that it needs to engage in massive, major-power war against a near-peer adversary such as Russia and China known to have advanced air-defenses and air-to-air platforms.

Being engineered for a carrier, the F-35C’s 51-foot wingspan is larger than the Air Force’s F-35A and Marine Corps’ F-35B short take-off-and-landing variants. The fighter is configured to carry 19,000 pounds of fuel and 18,000 pounds of weapons. An empty F-35C weighs approximately 35,000 pounds. It can fire two AIM-120 air-to-air missiles and two 2,000-pound Joint Direct Attack Munitions. The F-35C can reach speeds up to Mach 1.6 and travel more than 1,200 nautical miles.

In a document described as the “Naval Aviation Vision,” the F-35C is also described as being engineered with reinforced landing gear and durable coatings to allow the F-35C to withstand harsh shipboard conditions while delivering a lethal combination of fighter capabilities to the fleet.

Previous testing of the aircraft involved catapulting the stealth fighter off the aircraft carrier runway deck with a much lighter load of weapons; the full complement of armaments for the F-35C is designed to maximize its potential mission envelope and allow it to drop laser and GPS-guided precision Joint Direct Attack Munitions, use air-to-air weapons in the event that the aircraft needs to dogfight or destroy enemy drones and fire a 25mm gun for, among other things, the prospect of close-air support or surface attacks against enemy ships.

The F-35C is also able to fire the AIM-9X along with other weapons; in the future it will have an ability to drop a Small Diameter Bomb II – a high-tech weapon now in development able to track and destroy moving targets from great distances using a tri-mode seeker. The SDB II uses millimeter wave, laser and infrared guidance technology.