New Chapter for Aviation: The Industry Is Recovering 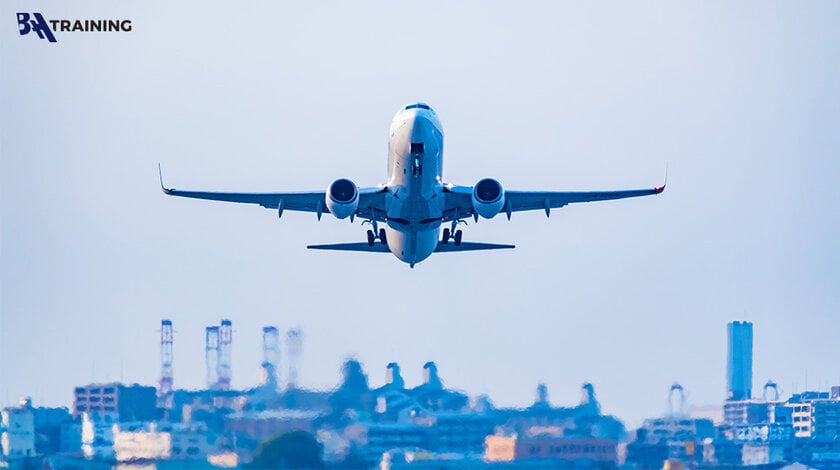 The pain from the Covid-19 crisis has been felt by all aviation industry players that were forced to take drastic measures, as layoffs, fleet cuts, restructuring, etc., to stay in the game. As a result, the pilot profession, which had always been a marvel, all of a sudden started raising more questions than giving answers. But the worst is behind us. The recovery profile, although diverse geographically, is taking place today already and is projected to continue with no further double dips.

Resilience to crisis proved more than once

While the current pandemic has been unprecedented for the industry and humankind in terms of its disruptive impact, it’s not the first challenge aviation has ever dealt with.

Despite these downturns, aviation has still proved resilient to handle the abnormalities and secure long-term growth. Based on past experiences, the Covid-19 will not prevent the airline traffic from stabilizing, although the effect of the pandemic has been the most devastating compared to other crises. 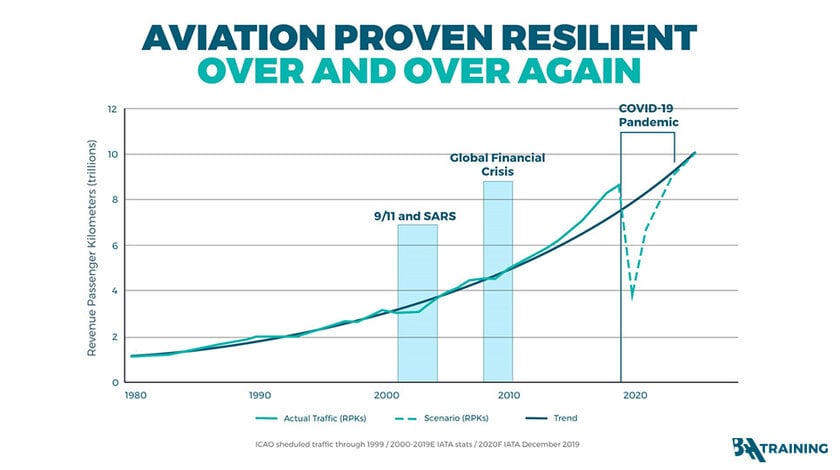 Although a lot has changed since the Covid-19 outbreak started, key factors influencing pilot demand are the same. Age-based retirement combined with fleet growth has always paid a significant part in new pilot job occurrence.

A third party’s analysis forecasts the commercial aviation market to continue growing over the next decade. Over 11,000 additional aircraft are expected to join the active worldwide fleet, raising the pilot demand to 264 000 during the next ten years. According to the same source, around 3.8 percent of commercial pilots will be retiring or leaving the profession every year, triggering the demand for 126 000 new commercial pilots over ten years.

An American consulting firm Oliver Wyman has published its research findings, stating that the industry will require 792 new pilots in Europe as early as in the beginning of 2022. By the end of 2023, the demand will surge, creating a shortage of 2,264 pilots, with the trend being upwards ever since.

If you begin training as a pilot now, you will obtain your pilot licence by the time the economic slump will have remained in the past.

The abstract from the IATA report analyzing aviation during “periods of turbulence” reads: “Approximately 72 percent of the impact of the initial shock persists one year after the event”. “Two years on, the effect of the shock on global air traffic is down to just over half of the initial effect, while after five years the effect is just under one-fifth of the initial impact.”

Boeing’s Commercial Market Overview 2020-2039 is even more optimistic. It expects air travel to ultimately return to 2019 levels in no more than three years. It is precisely the duration of pilot studies, so you will be just in time if you begin now.

As paradoxical as it sounds, some European airlines not only did not fall off a cliff during the crisis but also managed to invest in their future. Wizz Air, for example, in August 2020, was running 81 percent of its regular operating schedule and opened 18 new bases during the fiscal year 2021. Ryanair has opened 3 new bases for the summer of 2021 and signed a purchase agreement for 75 new Boeing 737 MAX aircraft. 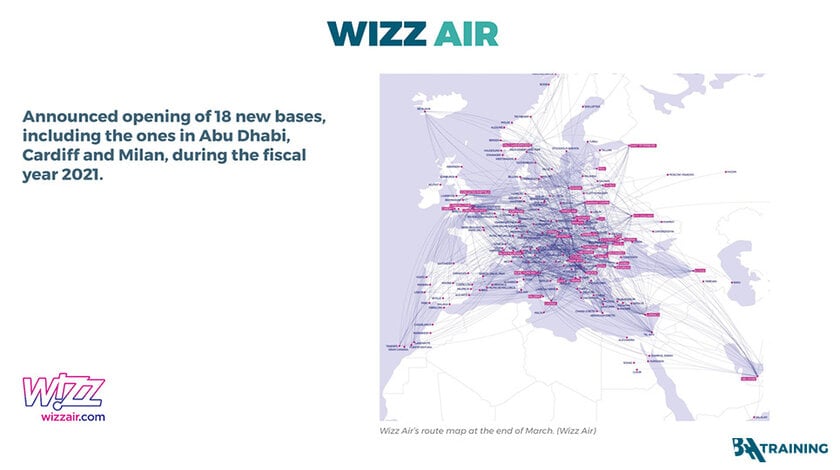 As for the American carriers, many are already actively hiring. American Airlines, allegiant, Frontier Airlines, spirit, FedEx and others all have active advertisements stating that hundreds of pilots are needed.

Globally, the scheduled seat capacity is at about 58 percent of pre-pandemic levels. However, as restrictions are further relaxed, CAPA projects seat capacity in Europe for Q3 2021 to reach 74 percent. Even if the forecast appears to be too ambitious, more than 50% of 2019 levels for Q3 2021 would be considered a good result from today’s standpoint.

A vital role of vaccination

Multiple passenger surveys show that the main reason people are not traveling is not the health risk they fear to undertake. They do not want the inconvenience of being stuck somewhere they do not want to be and quarantine perspective. Therefore, the rapid vaccine roll-out and availability of the EU Digital Covid Certificate will encourage people to travel and give airlines a boost.

Speaking about the vaccination, more than half of the country’s inhabitants received at least one dose of the Covid-19 vaccine in countries such as Israel, the United Kingdom, Canada, Mongolia, Chile, Bahrain, Hungary, and the United States. As for the trust in the digital passport, a study conducted by Amadeus found that 91 percent of travelers would be comfortable using it for future trips. 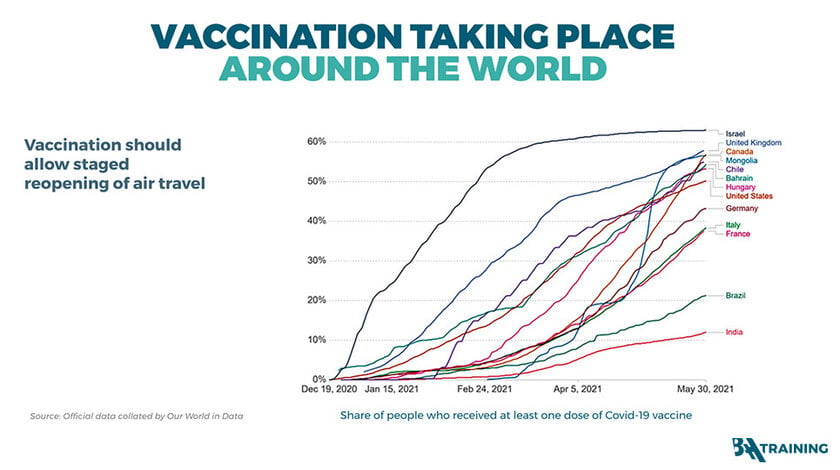 Although the impact of the COVID-19 pandemic is still not over, there are already bright spots. Many carriers have depleted their cash reserves, burdened by debt. But others have been looking ahead and following their expansion plans. Historically, the industry has always recovered and emerged from the crisis bringing more innovation in practice and learning from its mistakes. People are eager to travel, with vaccination being their gateway to the transformed air travel and the life they used to have.

Given all said, the pilot profession and its reputation are soon to be re-born once again, so today’‎s student pilots are tomorrow’s ‎great career makers. Join the ranks of pilots now – life is striped like a zebra, and aviation is almost ready to transition to its white stripe!