Results of the Paris Air Show in Le Bourget for Russia 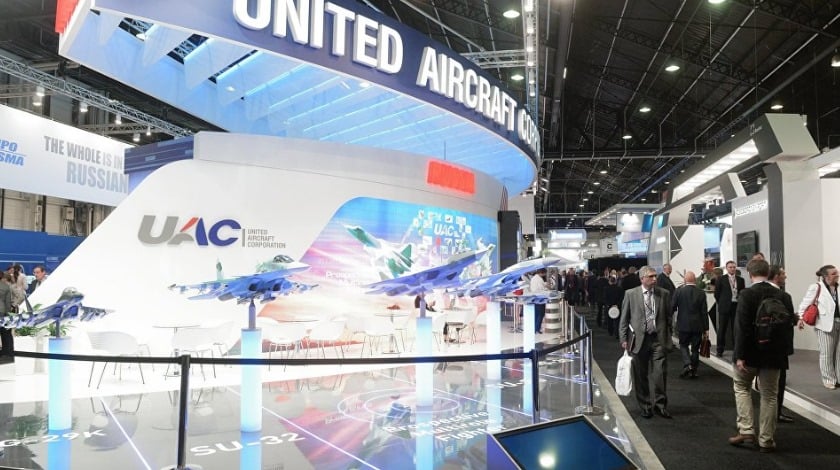 Owing to the position of the French authorities, Russia has not brought any full-scale models of its military hardware to the Le Bourget international aerospace show. Despite this, Russian defense manufacturers actively participate in it.

Russia is represented by Rosoboronexport, the United Aircraft Corporation, Russian Helicopters, Roscosmos, the United Engine Corporation and about a dozen other aircraft and aerospace firms such as Irkut Aircraft Company, Sukhoi, MiG, Ilyushin and Beriev, the titanium and aluminum producer VSMPO-Avisma and others. All the Russian companies are demonstrating 190 promising aircraft and space technology items.

As Rosoboronexport explained, the Le Bourget aerospace show organizing committee had not imposed any restrictions and had guaranteed Russia the safety of its exhibits and its exposition; “however, the French customs bodies banned delivering full-scale items of military products to the country.”

In this regard, Russia could not send weapons and military equipment to the aerospace show.

Among the commercial aviation aircraft at the Paris air show was the Sukhoi Superjet 100. SSJ100 painted in the Interjet livery.

Russia’s newest medium-haul airliner MC-21 (it performed its debut flight on May 28, 2017) is represented by a training simulator for flight crews.

The United Aircraft Corporation demonstrates at its stand the models of the MC-21-300, Il-114-400 airliners and the Multipurpose Transport Aircraft (MTA), which Russia is developing jointly with India, the Be-200 and the Be-103 amphibious aircraft, and also conceptual developments for the perspective cargo and passenger plane (M-60).

Also at the stand of Rosoboronexport was demonstrated the model of the lightweight multirole Ansat helicopter manufactured by the Kazan helicopter enterprise.

It emerged at the Le Bourget aerospace show that Russia has won a bidding contest for providing deck helicopters Ka-52K for the Egyptian amphibious assault ships Mistral, the head of the federal service for military-technical cooperation Dmitry Shugayev said.

According to him, Russia and Egypt are now approving the technical concept of the helicopter and the contract’s financial terms. The work carries on and the contract is quite outstanding and significant, Shugayev noted.

Also announced at the Le Bourget aerospace show that Russia had signed a three-year contract with Belarus for the delivery of Su-30SM fighter jets. Also Shugayev said that Russia had delivered the first two out of 12 Mil Mi-35M helicopters to Nigeria under a contract to be implemented by 2018.

The Rosoboronexport chief also said that the deliveries of S-400 surface-to-air missile systems to China would begin in compliance with the schedule.