Russia Long-Range Bombers and Navy Will Work With France 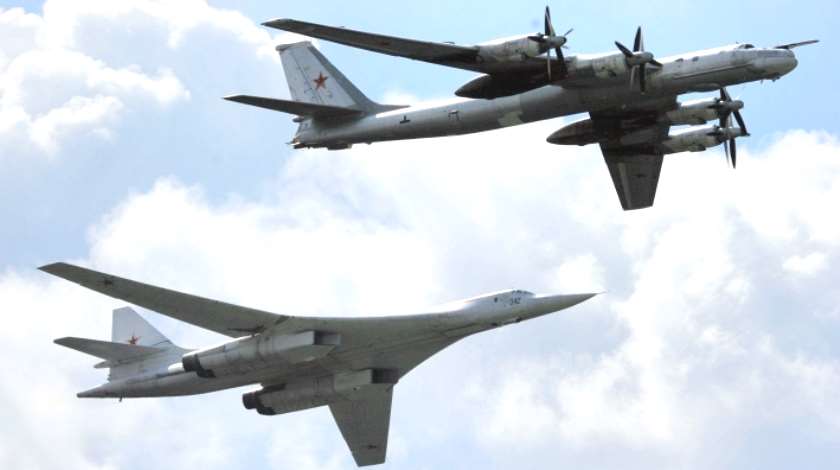 Russia has deployed its fleet of strategic bombers to double the volume of airstrikes on Islamist targets in Syria, Defense Minister Sergey Shoigu has announced. Vladimir Putin has ordered a cruiser to coordinate operations with French naval forces in the Mediterranean.

“We are conducting a mass airstrike campaign against Islamic State targets in Syria. We have now doubled the number of sorties, which is allowing us to conduct operations throughout the length and breadth of the country” Defense Minister Sergey Shoigu said during a Security Council meeting in Moscow chaired by the Russian president.
Shoigu said that Russia’s Tu-95, Tu-22 and Tu-160 strategic bombers have been brought into the operation, while the Air Force command added that the strike group has been bolstered with 37 new planes, including Su-34 bombers and Su-27 fighter jets.

The head of the General Staff reported that the new phase of the anti-ISIS campaign will involve 25 long-range bombers flying out of airfields in Russia.

“By conducting military missions in Syria, you are protecting Russia and her citizens,” Putin told his military chiefs. “Our air campaign in Syria must not only be continued, it must be boosted, in such a way that the criminals are made aware that retribution is inevitable.”

The Russian president has issued orders for Russia’s Moskva cruiser, covering the Russian base in Latakia from the Mediterranean Sea, to work together with a French naval group led by flagship Charles De Gaulle, a 26 fighter-jet aircraft carrier, which is departing for Syria this week.

“The French naval group, led by the air carrier, will soon reach your area of operations. We need to establish direct contact with it, and treat it as an ally,” the Russian president said. “We need to develop of a joint action plan for both sea and air operations.”

The Kremlin said that the parameters for a joint mission had been agreed upon by Putin and French President Francois Hollande, following a personal phone call.

“The two leaders focused their attention on bilateral and multilateral cooperation in combating terrorism,” a Kremlin statement said. “This includes closer ties and joint operations between the military command and intelligence services of Russia and France in Syria.”

Vladimir Putin and Francois Hollande are to meet in Moscow on November 26.

The chief of Russia’s General Staff, Valery Gerasimov, reported that Russian forces have made nearly 2,300 sorties in 48 days since their deployment at the behest of Syrian President Bashar Assad. Gerasimov said that 26 cruise missiles had been launched from Russia’s Caspian Fleet, and ten space satellites had been involved in mapping target sites, including several that had been repurposed from civilian use.

“The work of Russia’s air force has enabled Syrian government forces to go on the offensive along the entire front in the regions of Aleppo, Latakia, Idlib, Homs and Damascus, freeing significant territories from terrorist control,” said Gerasimov, mentioning that in the province of Aleppo alone, 40 settlements have recently been liberated.