Russian Aviation Industry – The Results of 2016 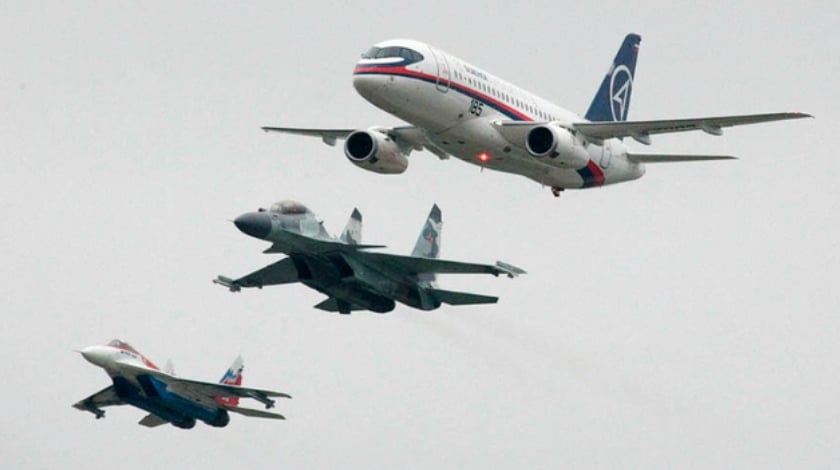 In 2016, the Russian economy continued crisis, complicated by low energy prices and the continuation of financial and economic sanctions.

Key economic indicators (according to the Federal State Statistics Service) in relation to 2015: Gross domestic product – 99.3%, industrial production index – 101.1%, production index by type of activity “Manufacturing” – 100.1%. The production and scientific and technical potential of the aviation industry in Russia, mainly, ensured the fulfilment of government orders and orders of aviation companies for the creation and production of aviation equipment, as well as for industrial and civil purposes.

The development of the aviation industry for 2013-2025,” was not achieved. In 2016, 190 state and civil helicopters were produced, and 1255 aircraft engines were manufactured.

June 8 in Irkutsk, the new Russian medium-range aircraft MC-21-300 was rolled out. In the near future, the beginning of flight tests of the aircraft is expected.

In November 2016 the second stage of flight tests at the flying IL-76LL laboratory of the new Russian TRDD PD-14 (a family of promising civil turbofan engines with a thrust of 9-18 tons) began. On December 1, the airplane took off with the prototype of the PD-14 engine No. 100-07 operating at the maximum operating level developed by JSC “UEC-Aviadvigatel”. During 2016, under serial production conditions, Perm Motors assembled three new engines, two bulkheads were installed. At the aggregate enterprises development and development in the production of systems for the engine PD-14 continues.

“Sukhoi Civil Aircraft” completed the development of the draft design (Gate 3) of the long version of the SuperJet – SSJ 100SV, designed for 120 passengers. In 2017, at the air show in Le Bourget and at MAKS-2017 the company will be ready to present the aircraft to potential buyers.

In 2016 it was decided to finance the work on the resumption of production of a turboprop aircraft of local air lines IL-114-300 and a wide-body long-haul IL-96-400M.

At the end of the year, the press service of the AK. S.V. Ilyushin reported the completion of the factory flight tests of the first experienced modernised heavy military transport aircraft Il-76MD-M. By the program of preliminary (factory) tests on the aircraft, 17 flights were performed. In 2017, the aircraft is planned to be presented for state joint tests.

On December 14, in Ulyanovsk, the second stage of the factory tests of the first prototype of the Il-76MD-90A heavy military transport aircraft (Head No.0102) began. The airborne navigation complex was modernised on the airplane, an on-board defence complex and a new-generation on-board communication complex were installed.

In Voronezh, at the VASO plant, intensive work was underway to assemble the first flight prototype of the IL-112V light military transport aircraft. In 2017, it is expected to roll out and the first flight.

On May 30 in Taganrog, the first serial Be-200BC aircraft was rolled out. Earlier, the assembly of these aircraft was carried out at the facilities of the Irkutsk Aviation Production Association. In 2008, it was decided to transfer production of this type of aircraft to Taganrog. Be-200ChS proved itself during extinguishing fires and rescue operations, including abroad – in Greece, Portugal, France. The plane has passed the procedure of European certification, its certification is planned in the USA.

The work on the creation of a DRLO A-100 aircraft continues. The aircraft is at the stage of development work, the first flight A-100 will make in 2017. The regular Il-76MD-90A transport aircraft for the flying radar A-100 will be produced at the Aviastar-SP plant in Ulyanovsk.

At the PJSC “Kuznetsov” began the serial assembly of engines NK-32-02. The first flight of an experienced modernised Tu-160M2 is scheduled for the end of 2018.

In 2016, the design of a prospective TRDD with a thrust of 35 tons – PD-35, began. Beginning of flight tests at the flying laboratory is planned for 2020. It is planned to create the next generation of thrust engines from 20 to 50 tons for wide-body long-haul aircraft. The project is estimated at 180 billion rubles for 10 years, the serial production of new domestic aircraft engines should begin by 2026. First of all, PD-35 is planned to be installed on a promising Russian-Chinese long-range wide-body passenger aircraft.

The development of a prospective engine for the new (5+) generation for the PAK FA of the 2nd stage of development is being continued with the aim of improving the flight performance of the complex, as well as for new and modernised systems of frontline and army aviation, including unmanned aerial vehicles.

During 2016, more than 60 new helicopters, including the Ka-52 Alligator, Mi-28N Night Hunter, Mi-35, Mi-8AMTSH Terminator, Mi-26, Ansat-U, came from the manufacturing plants in Part of the army aviation.

In aircraft engine-building design bureaus and serial plants and in aggregate enterprises, work was also carried out to create a new and modernize the machinery in operation:

The Ministry of Industry and Trade in 2016 amended the state program of aviation development for 2013-2025. For the implementation of the program in 2016, 55.5 billion rubles were provided, but taking into account the changes introduced, the volume of financing decreased by 1.8 billion rubles.