Russia’s A320 And B737 Alternative Attracts Orders 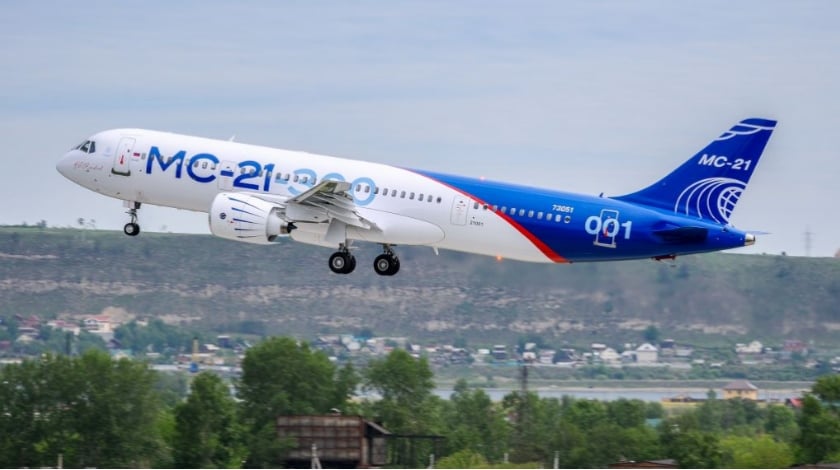 After test flights were successfully completed in June, the Russian built single-aisle twinjet MC-21 is now being prepped for a second round of testing.

Deliveries are expected to start in 2018 and Russian state media has said numerous contracts with domestic and foreign carriers have already been agreed, although it is largely expected to fill Russian airline orderbooks.

Irkut says the aircraft has attracted 366 orders so far. The majority of the orders announced so far accrue to Russia and the CIS countries (43 percent). Orders from Asia and Oceania are expected to number in at 28 percent; 11 percent from Latin America, six percent from the Middle East and 4 percent from Africa.

Built by Irkut Corporation, the new MC-21 passenger plane is a medium-range aircraft that hopes to rival the Airbus A320neo and the Boeing 737.

Still undergoing testing, the aircraft is due to enter serial production next year. The company is focused on certificating the aircraft with the suppliers as soon as possible, allowing Irkut to deliver the aircraft on the current schedule to Aeroflot at the end of 2018.

Aircraft avionics components are supplied by Honeywell, Thales and Elbit Systems. Other partners include Zodiac Aerospace, Eaton, Meggitt and Goodrich. More foreign suppliers have been involved in setting up a modern production line at an Irkut facility in Irkutsk in Siberia and in delivering materials for aircraft production.

The MC21-300 would be able to service routes of up to 6,000 km and that its operational costs would be up to 15 percent cheaper than current generation aircraft.

In many ways, MC-21 aircraft family appears to offer a formidable challenge. Fitted with a pair of Pratt & Whitney’s state-of-the-art engines as one power plant option, the MC-21’s uniquely crafted composite wings lift the wide fuselage that is pressurized at the lowest density altitude in the single-aisle class, with an integrated flight deck and full fly-by-wire flight controls.