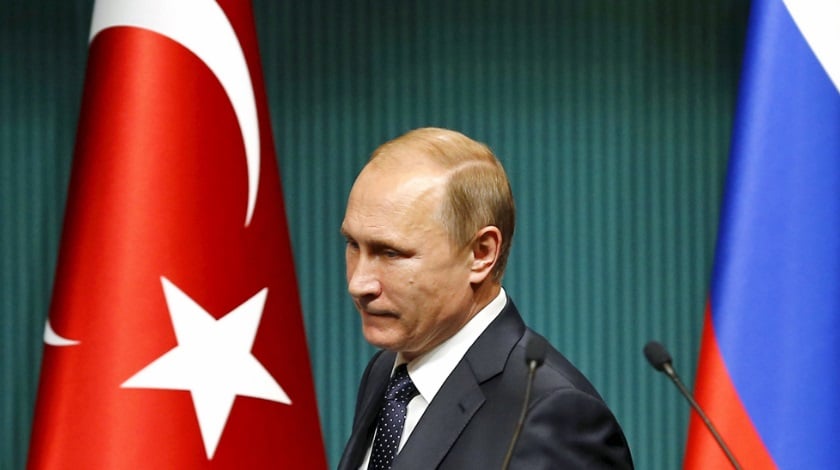 Sanctions ordered by Russian President Vladimir Putin in response to the downing of a Russian warplane are already weighing on the Turkish economy.

The plane was shot down on the Syrian-Turkish border on Nov. 24, and the package of sanctions was announced shortly after.

The incident has become a point of heated contention between Putin and Turkish President Recep Tayyip Erdogan, and with the personal pride of the two leaders now at stake, a swift resolution is looking increasingly unlikely.

Core measures in the package are restrictions on Russian nationals traveling to Turkey, limitations on Turkish companies’ activities in Russia and a ban on imports of food and other goods from Turkey.

Although Russia will officially suspend its via-free travel agreement with Turkey in January, Turkish visitors are already reporting trouble entering the country.

A Turkish information technology consultant in Istanbul said he was refused entry into Russia without any clear reason on Sunday after immigration officials at a Moscow airport kept him waiting for five hours. The man said he has visited Russia more than 30 times and had never been turned away before.

Mehmet Okay, chairman of leading Turkish construction outfit Ant Yapi, said the company is having a hard time carrying out business in Russia because it cannot send in laborers and materials.

And major electric engineering company Anel Elektrik suddenly lost a 30 million euro ($33.15 million) order it had won for work on a sports stadium being built in Moscow.

Russia will also ban imports of tomatoes, cucumbers and other vegetables from Turkey, starting in January. Many Turkish exporters have already stopped shipments due to stiffer customs inspections in Russia.

Vegetable prices across Turkey have plunged 40%, according to a top official of an agricultural industry association.

The Turkish tourism industry is expected to take a hit, too. Some 3.5 million Russians visited Turkey in the first 10 months of this year, but a plunge is all but inevitable, as the sanctions include a ban on charter flights between the two countries and on Russian tour operators offering trips to Turkey.

The impact on Antalya, a resort destination along the Mediterranean Sea, could be particularly severe. According to an official at a major local hotel, Russians account for half of all guests in the summer. Even greater efforts to lure tourists from other countries will likely not be enough to offset the expected decrease in the number of visitors from Russia.

A complete halt to Turkey’s economic relationship with Russia would cost the Turkish economy as much as $9 billion, Deputy Prime Minister Mehmet Simsek, the country’s economic czar, said on Monday during a TV broadcast.

Russia is facing its own economic contraction, brought on by sanctions imposed by the U.S. and European countries over the Ukrainian situation and by plunges in crude oil prices. The ban on food imports from Turkey could push its already-high rate of inflation up even further.

In the energy field, Russia announced its decision to freeze plans to build a gas pipeline via Turkey. Moscow’s sanctions, however, do not touch on the supply of gas to Turkey or the construction of a nuclear power plant in Turkey by Russia’s state-run Rosatom nuclear energy company.

Nevertheless, Turkey, which relies on Russia for more than 50% of its gas needs, is eager to find alternative suppliers. Erdogan and Turkish Prime Minister Ahmet Davutoglu have recently visited a total of five gas-producing nations in the Middle East and Central Asia. Securing new contracts, however, will take time.

Given their mutual economic dependence, a protracted confrontation between Russia and Turkey would mean disaster for both sides.

But with national and personal prestige at stake, neither Putin nor Erdogan is willing to back down.