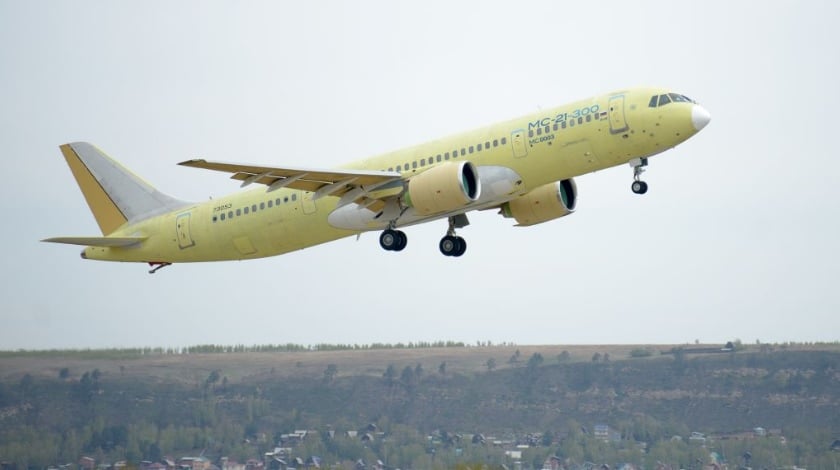 On May 12, 2018, the maiden flight of the second MC-21-300 test aircraft took place at the airfield of Irkutsk Aviation Plant, the affiliate of Irkut Corporation (a UAC member). The testing results of the first test aircraft were taken into account in the production of a new aircraft.

The flight program included testing the aircraft for stability and controllability for various wing configurations with retracting and extension landing gear, as well as testing the on-board equipment.

Acting Minister of industry and trade of the Russian Federation Denis Manturov said: “The flight of the second aircraft is a significant event that will ensure the timely conduct of flight certification tests.”

The Minister said that today, three MC-21-300 aircraft are taking part in the test program: two of them fly, one passes static tests in TsAGI.

“In addition, the Irkutsk Aviation Plant is building three more test aircraft. In parallel with the flight and static tests, active preparations are being held for the deployment of serial production of the new airliner” – mentioned Mr. Manturov.

The President of JSC “UAC” and Irkut Corporation Yuri Slyusar said that Aviastar-SP plant has started manufacturing panels for the first aircraft to be delivered to customers. “In recent years, the Russian aviation industry has undergone a profound modernization. The most modern scalable assembly line for the newest civil airliners was commissioned at the Irkutsk Aviation Plant.

Within the UAC, fundamentally new competencies have been developed in the field of production of structures from polymer composite materials. Their widespread use is one of the main advantages of the aircraft. The new high-tech production will ensure the development of the MC-21 program and other perspective aviation projects” – Yuri Slyusar emphasized.

The first MC-21-300 aircraft undergoes flight tests at the airfield of Flight Research Institute n.a. M.M. Gromov (Zhukovsky city, Moscow region). Tests confirm the correctness of technical solutions. In particular, the aircraft was tested for stability and controllability, its takeoff and landing characteristics were determined, various modes of operation of the power plant were tested, including engine start in flight, the characteristics of the aircraft withdrawal from deep bank roles were determined.