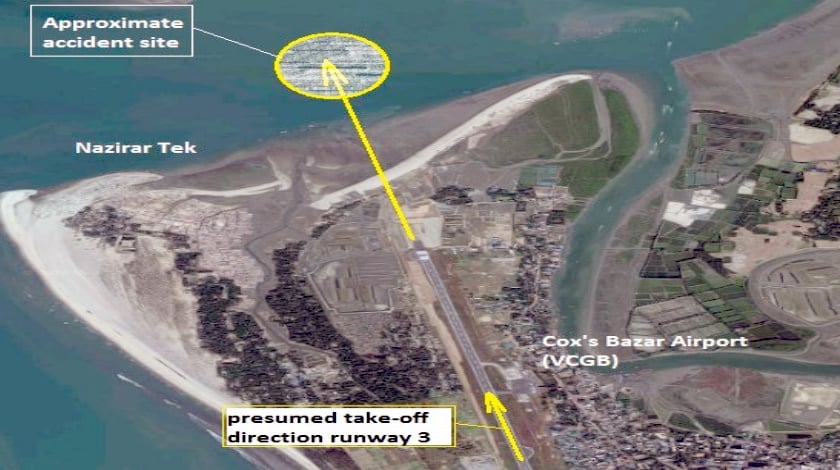 At least one crewmember died when the Antonov An-26 cargo aircraft crashed into sea after take-off from Cox’s Bazar.

Loaded with a cargo of shrimps, the Antonov An-26 took off from Cox’s Bazar to Jessore.

Due to circumstances unknown yet, the pilots (all russian nationals) reported machanical troubles and elected to return to the airport but were unable to maintain altitude.

The aircraft lost height until it crashed into the waters of Gulf of Bengal, about 5 km offshore and disintegrated on impact about 10 minutes after getting airborne.

The accident located near beaches of Naziratek Point, not far from the end of the runway.

Lacking sophiticated emergency equipment, access to the aircraft and the cockpit was difficult.

It is understood that at least one pilot (flight engineer) did not survive the accident.

A crew of four were on board, he said.

Local fishermen were first to get to the scene of the crash. Cox’s Bazar fire fighters arrived around 9:45am and pulled the flight engineer and co-pilot out of the plane, said Cox’s Bazar Fire Service and Civil Defence Deputy Assistant Director Jasim Uddin.

The injured crew were admitted to Cox’s Bazar Sadar Hospital in critical condition where flight engineer Gofran, a Russian citizen, succumbed to his injuries. The co-pilot, Bolu Dimar, 47, a Ukrainian citizen, is undergoing treatment at the hospital, he said.

Two others are still missing, he said, adding that the Fire Service, Coast Guard and Air Force contributed to the rescue operation.