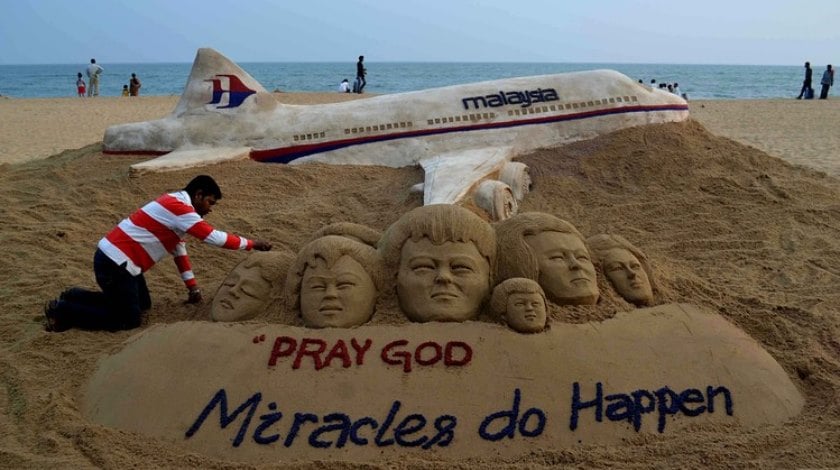 Two years ago on March 8, 2014 tragic news hit the world when Malaysian Airlines’ plane disappeared. The fact that 239 people were missing caused a lot of pain for families and friends and left them in uncertainty which lasts until now.

Malaysia Airlines flight MH370 departed Kuala Lumpur at 12.41am and was expected to land in Beijing at 6.30am. Two hours after the takeoff the connection with the aircraft was lost. It is known that the last connection aircraft captain Zaharie Ahmad Shah made was in the airspace controlled by Vietnam and it had never made a contact with Chinese controllers.

Search and rescue teams from Vietnam, Malaysia and Singapore began their work more than 12 hours after the contact with flight MH370 was lost. Ships and aircraft from China, US and the Philippines joined later. However, nothing was found at that time.

Such mysterious disappearance of the plane aroused a lot of theories. One of them, according to Malaysian national news agency, is that the plane ran out of fuel and was forced to land in the Ocean. It could have been floating for a while before sinking. As the remnants were found far from the searched area the plane either was far from the route or the part had been pulled by the sea. The second theory according to the former French airline director Marc Dugainis is that the missing Boeing777 was shot down by the US fighter jet who feared that the plane was hijacked and was about to attack the US military base in that area. Mr. Dugain claims that he had some witnesses who saw big plane flying low but he was told not to look to closely into the case and this makes him suspicious. There are several strange theories coming as a guess. For example, there are people who believe that the plane was taken by the aliens. Or that North Korea took it as someone’s whim to have a new plane according to anonymous aviation worker. Another guess by famous US science writer Jeff Wise is that the president of the Russian Federation might want to show his power against the West and hijacked the plane. One more, that it was this plane’s destiny because its production number was 404 meaning “not found”. Malaysian police is even considering the whole situation as a life insurance scam. Many more theories can be found on the internet but the reasons why the plane went missing are still a mystery.

More than one year after the wreckage was found on Reunion Island in Indian Ocean and was confirmed to be the debris of the missing Boeing 777. This brought the new hopes for those in uncertainty. Unfortunately, one more year has passed and we are still in the same position.

In the most likely scenario supported by investigators, no one was at the controls at the time of the crash. It is known as a “ghost flight” theory meaning that the plane went out of fuel. Australian Transport Safety Bureau (ATSB) supports the theory and puts all the effort into the search process which is still going on. Four ships have searched more than 85,000sq km in the Southern Indian Ocean this month (120,000sq km of seafloor searched in total).

One meter piece of metal have been found at the end of February by Blaine Alan Gibson on a sand bank in Mozambique. The investigation will show weather it belonged to lost B777. Confirmation would support the theory as the place where it was found is consistent with drift analysis.

While facts do not show much hopes, Martin Dolan, the head of Australian authority remains positive. Mr. Dolan believes that the plane will be found by the end of the search operation or even earlier. He puts all the hopes in the 30,000sq km which are planned to be search until July.

Alternative scenarios might be applied in the worst case. As for now, difficult search process using high-tech equipment cost around $130 million for Malaysia, Australia and China together. The “controlled glide” theory would increase the search area three times as big and would raise the cost of search even higher.

As long as the plane remains missing and families are grieving there are many people around who cannot believe that huge Boeing777 might disappear without any notification by radars. All the circumstances seem to be strange because neither help signal was recorded nor air conditions were unfavorable.