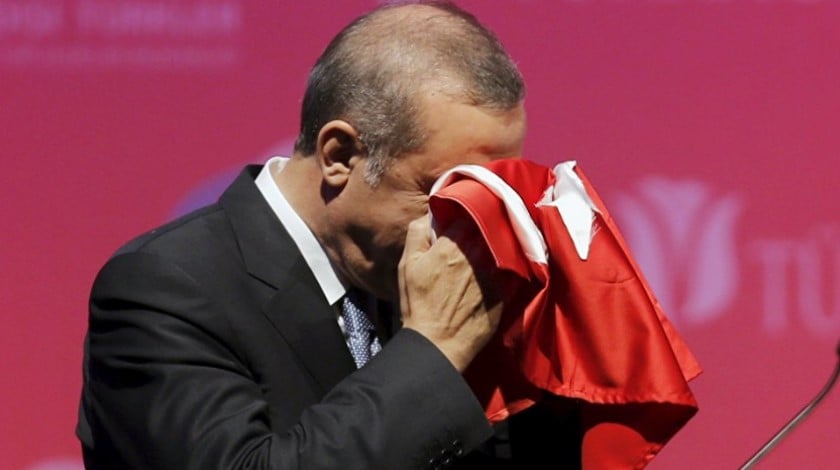 The greatest secrets: the West has no people on the ground in Syria to take over the liberated territories; the Russians still seek partnership, Erdogan has bitten more than he can chew, and ISIS is a phantom, after all.

Erdogan is worried about the outcome of the upcoming elections and is contemplating bringing down a Russian aircraft, the anonymous Twitter user, who goes by the name of Fuat Avni, posted on October 11. WikiLeaks retweeted an article that mentions Fuat Avni’s exposé, asking, “Did Turkish ‘deep throat’ reveal Russian jet shootdown plan six weeks ago?”

Fuat Avni, who is often sharing accurate insider information exposing Erdogan and his government, is said to have claimed that Erdogan was the one to give order to shoot down the Russian bomber over Syria under the false pretext that the aircraft violated Turkish airspace.

According to information WikiLeaks shared on Twitter, Erdogan had been trying to mobilize his voters prior to snap general elections, which were held on November 1, by dramatically escalating tensions with Russia. Interesting fact: The ruling Justice and Development Party (AKP), which was founded by Erdogan, managed to regain parliamentary majority, which it lost five months earlier.

Erdogan demanded that President Bashar Assad give half of his government posts to the MB (Muslim Brotherhood). Assad refused, and Erdogan unleashed the dogs of war. The jihadis, that is the Islamist fighters of every hue, flocked to Syria through Turkey. Their weapons were delivered via Turkey. Turkey is their preferred transit for looted antiquities and for illegally produced oil.

Following AKP’s victory, Erdogan, who as a president has limited powers, has pushed for a new constitution, which would grant the president significantly more powers. However, the AKP still needs 13 more votes to be able to hold a referendum on this issue.

“The November 1 election ushered in four years of stability and confidence. Let’s make this period a time of reforms, prioritizing a new constitution,” Erdogan said on November 10.

On November 24, a Turkish F-16 shot down a Su-24 bomber involved in Russia’s counterterrorism operation in Syria. Ankara claimed that the aircraft had violated its airspace, although it was shot down over Syrian territory.

Russian defense officials provided evidence that the aircraft had not crossed into Turkey. The pilot, who survived the crash, also confirmed that the alleged violation did not take place. Moreover, the crew, according to the pilot, did not receive any warning prior to the attack.

Russians are enjoying their Syrian adventure. Twenty days after its start, their entry into the Syrian war has paid off and brought some dividends. They displayed their military toys and duly impressed other boys in the sandbox. After a long period of despondency the Russians have now been cheered up, thank you, they feel much better, as a man convalescing after a grave disease. They like the pictures of their pilots in American-style top-military-chic overalls, of their exquisite ultra-modern jets, of the sheer audacity of this campaign so far from home. They like the new publicity of their military operations, unprecedented for this country. Their MoD posts videos and allows them to follow the attacks and the hits in real time.

Putin has been very popular before the war, with 86% support in the ratings, and now his public support has gone through the roof. The best of it, from the Russian point of view, was the daring launch of their 26 brand new Kalibr cruise missiles from a frigate in the Caspian Sea all the way to Syria over the hills and deserts of Iraq and Iran. Though Iraq and Iran had been warned, they did not leak the news to their US partners. The missiles made perfect hits, and military experts say this new class of cruise missiles would allow Russia, if necessary, to take care of the US missile shield installations in neighbouring East European countries. The Russians were pleased as on the day they launched their first Sputnik.