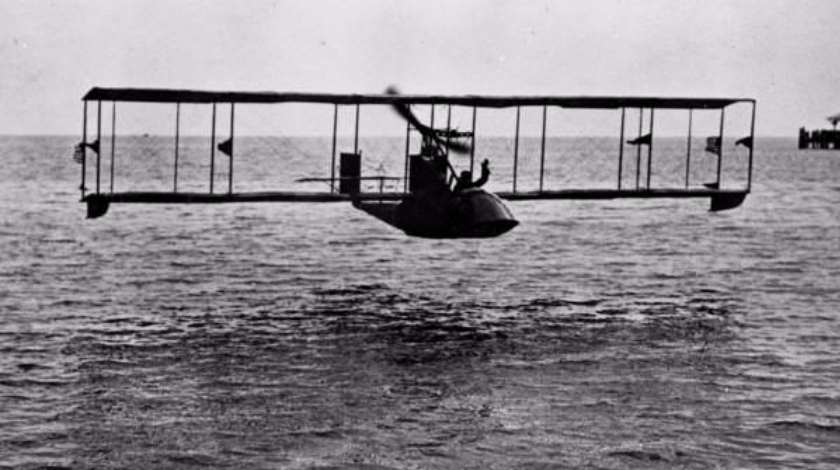 For the major part of the globe, the 1st of January marks the beginning of a new year. For the aviation industry, therefore, this day marks a special start, too.

On this day in 1914, the introductory chapter of commercial aviation was written – the first scheduled flight of a passenger airline, between St. Petersburg and Tampa, Florida, US, was successfully completed.

It was the 23 minutes sensation – first scheduled passenger service – operated by The St. Petersburg-Tampa Airboat Line.

The plane, or, to be more precise, a ‘flying boat’, a Benoist XIV named Lark of Duluth, was operated by a pilot Tony Jannus. Meanwhile the first passenger, who paid a $400 (today equals approx. to $9,000) bid in the auction for the inaugural flight, was Abram C. Pheil, a former mayor of St. Petersburg.

After the first take off, the flights were made regular. The St. Pete’s Line was flying twice a day, six days per week. Wondering what the cost of this travel was? One ticket cost $5 (today equals to nearly $100).

Although this amount was rather huge for that time, the airline was performing extremely successfully, it had even added the second Benoist plane, which was operated by the brother of Tony Jannus. Through its existence the St. Pete’s Line carried a total of 1,205 passengers.

Although it was live for only three months – it was fully enough to awaken the interest pave the way for the modern commercial flights. 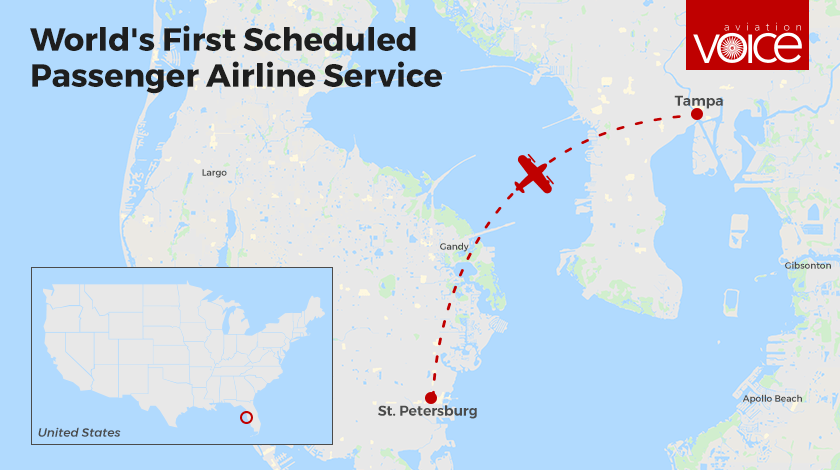 How Did It Start?

1913 marked a decade after the first Brothers’ Wright flight. These two brothers where the first to build and successfully fly world’s first aircraft. Thus, since then interest in aviation had been dramatically growing.

The ‘aviation virus’ also caught Thomas Benoist. The aviation entrepreneur from St. Louis was developing and building planes able to take off and land on water.

His activity, in turn, was closely monitored by another enthusiastic gentlemen Percival Elliott Fansler, who was a representative of a company, manufacturing diesel engines for boats.

The storyline of this history is not that twisted as in Agatha Christie’s detectives. Thus, it is not difficult to work out that these two man started to cooperate.

The driving force behind the venture was Fansler who came with a proposal to launch a commercial line from St. Petersburg to Tampa.

He tried to reach officials of Tampa to make them interested in the idea, however, did not succeed. Then he turned with an offer to St. Petersburg and, luckily, managed to attracted the attention some interested investors.

This way, in December of 1913 Benoist arrived in St. Petersburg. Together came the pilot, also one of the principal stockholders in the Benoist Aircraft Company, who was charged with a responsibility to fly the plane.

Plane for a Well-Known Pilot and One Passenger

Nowadays we have got used to associate commercial travel with huge airliners, haven’t we?

Meanwhile, a Model 14 Benoist was made of wood, fabric and wire. It weighted 567 kilograms, was 8 meters long and had a wingspan of 13 meters. The Benoist was powered by a Roberts 75-horsepower, 6-cylinder, water-cooled engine.

It could carry one passenger, who sat next to the pilot on a wooden seat in the open cockpit.

This first Benoist plane was tested piloted by already above-mentioned Tony Jannus, who was already a well-know aviator. He had carried Captain Albert Berry to make the first parachute jump from a plane in 1912.

On the first day of 1914, before taking off for the flight, a public ceremony was held. A crowd of nearly 3,000 people came to watch the spectacular show of the first ticked being auctioned and the plane taking off.

Most probably, deep inside the participants knew that they were making a history.