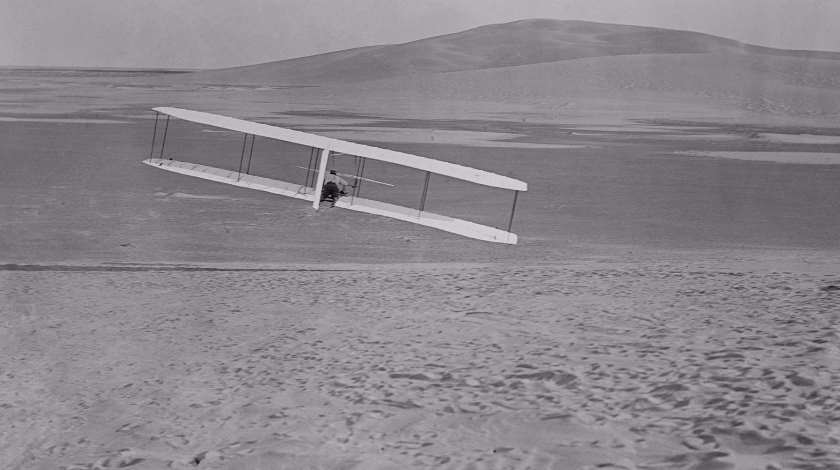 Before aviation has changed our lives and shaped the way we perceive air connection, a truly countless number of experiments was carried out, including the first successful flight of an aircraft completed over a century ago.

This day in aviation, 17 December, is all about aviation pioneers Orville and Wilbur Wright. In 1903 these two brave gentlemen from Dayton, Ohio, made history by inventing, building, and flying the world’s first successful plane.

It was a 12 seconds-long journey of the first heavier-than-air aircraft (a gasoline-powered, propeller-driven biplane) which covered the distance of 36.5 m (120 feet).

Living in the era of huge and modern airliners which in 20 hours can connect the furthest corners of the world (for example, New York – Sydney), it is difficult to imagine how this whole aviation thing began and developed through the decades. The shift from 12 seconds to 20 hours is an impressive achievement, isn’t it?

Wright Brothers: From Bicycle to Biplane

In the early XX century even thoughts about aviation could be compared to revolution. Orville and Wilbur Wright, therefore, were brave enough to have revolutionary ideas. Most probably they have never thought that their bold activity would lay the foundations for the modern aviation industry.

It all started not with planes. It all began with an active interest in the glider flights of the German engineer Otto Lilienthal in the 1890s and . . . BICYCLES.

In 1982 brothers opened their own bicycle sales and repair shop, later on started producing their own bikes. They conducted endless scientific experiments, collected so much valuable technical experience and even managed to earn some profits for their dream.

Orville and Wilbur were extremely enthusiastic men with a constant hunger for knowledge. After carrying out thorough researches of the earlier efforts to build a plane, Wright brothers finally started working on their dream – to create a heavier-than-air aircraft.

The brothers started by building kites based on the flight mechanics of birds they had observed, then moved on to manned gliders.

A trial period took almost three years. The first flight tests were conducted in 1900, the historic flight, in turn, was completed in 1903. It was a hard road full of discoveries, frustration and happiness. Through this time the brothers tested nearly 200 wings and airframes of different shapes and design, solved the problem of sustained lift and found out how to control the aircraft in flight.

They were nearly ready to fly. “It is possible to fly without motors, but not without knowledge and skill”, Wilbur said. However, it would not be the first powered aircraft flight without an engine, of course.

The Wright brothers failed in finding the proper lightweight commercial engine to power their plane, thus, decided to produce their own (by the way, one more achievement). After thousands of experiments, the Wright Brothers designed an efficient airplane propeller – a 12-horsepower internal combustion engine.

In December, 1903, the plane, called “Wright Flyer” was fully assembled. On December 14 Orville made the first attempt at powered flight, but the engine stalled during take-off and the plane dove into the sand suffering substantial damage. It took three days to repair it.

On 17 December, therefore, the aircraft took off to the air and was airborne for 12 seconds! Worth highlighting that on the same day three more flights were carried out and the final one lasted 59 seconds.

Currently, a Wright Flyer is on display at the Smithsonian National Air and Space Museum in Washington, D.C.