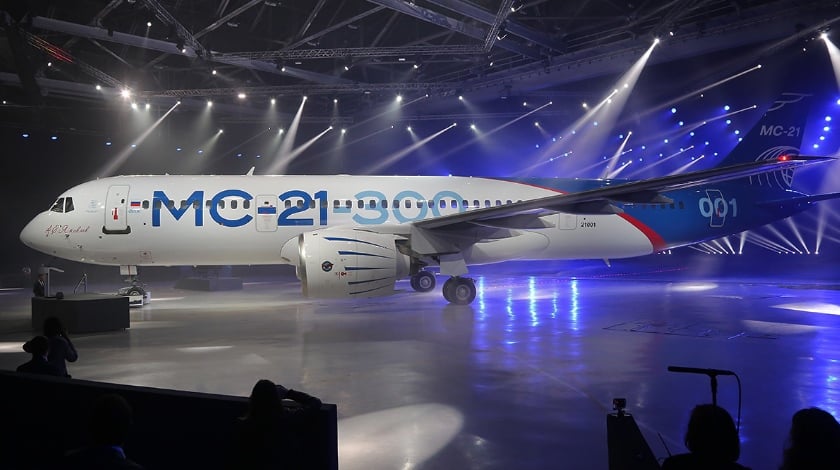 Today, the MC-21 aircraft has been rolled out for official presentation in the factory of the corporation “Irkut” in Irkutsk, Russia.

As Russian Prime Minister Dmitry Medvedev said, the first serial production of the medium- and short-range passenger jet is planned for 2017.

“This is a huge victory for our aviation industry and Irkut Corporation, our scientists, designers, engineers and workers,” Medvedev said. “I’m sure this is going to be a good machine, reliable and efficient.”

MS-21-300 with the basic capacity from 163 to 211 passengers has been shown at the ceremony. Now in the final assembly at the Irkutsk Aviation Plant is already has the second MS-21 prototype. According to Sergei Yamenova, Director of manufacturing, the second prototype will be ready by the end of summer.

The first prototype of the MS-21 is equipped with PW1400G engines of American company, Pratt & Whitney. This power plant has been certified by FAA this year. Russian MS-21-300 Certification with PW1400 is scheduled for 2018 and Aircraft Certification according to European standards EASA to take place a year later.

MS-21 will have an alternative powerplant – a Russian engine PD-14. In 2015, this engine had a experimental flight tests on Il-76LL flying laboratory. As of June 1, the total time accumulated during the all tests were 1000 hours. The second phase of flight tests are to be launched in July this year.

MS-21 family also includes the modification of MS-21-200, designed to carry between 132 and 165 passengers. The difference between basic and this version is that the fuselage will be shorter by 8.5 m.

An estimated 30-40 percent of the aircraft’s components are produced by Irkut’s foreign partners.

The corporation already has solid orders for 175 aircraft. The first client to receive MC-21 aircraft in late 2018 will be Aeroflot, which has ordered 50 units. Among the customers – “Aviakapital Service” (85 aircraft, including 50 for “Aeroflot”), “Ilyushin Finance Co”. (IFC, 50 BC), “VEB-Leasing” (30 units) and the airline “IrAero” (10 BC). The portfolio of pre-orders is more than 100 aircraft.