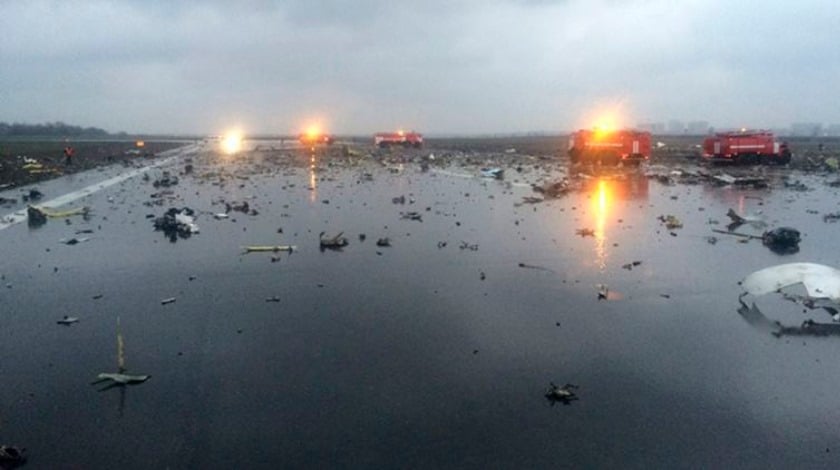 Russian state television has aired the final words of the pilots of the flydubai passenger jet that crashed in Rostov-on-Don last week killing 62 people, suggesting pilot error could be to blame.

Russia’s Rossiya-1 channel late Friday said it had obtained a transcript of the last words exchanged a minute before the Boeing 737 plunged to the ground from a source in the investigative commission with access to the plane’s voice recorders.

The plane, which was arriving from Dubai, exploded into a fireball last Saturday after missing the runway in the city in southern Russia while making a second attempt to land in heavy wind and rain.

The transcript suggests that the pilot lost control of the plane immediately after switching off the autopilot.

“Don’t worry,” the pilot says repeatedly in the transcript translated into Russian, before repeating seconds later “Don’t do that!” The last words are repeated calls to “Pull up!”

For the last six seconds of the plane’s dive, all that can be heard are “inhuman screams,” the channel’s source said.

The channel suggested — citing specialists while stressing that this was not the official version — that the pilot accidentally switched on a stabilizing fin at the tail as he tried to pull the plane back to a horizontal position.
With this fin activated, “the plane practically does not react to the pilot’s control panel” the channel said.

“The pilots clearly did not understand that the stabilizer was to blame for the steep dive.”

The channel said the pilot could have accidentally switched on the button activating the fin due to his reported “chronic fatigue.”

The only other possible explanation would be an “unprecedented glitch in the plane’s automatic systems,” the channel said.

Investigators have launched a criminal probe into whether poor weather, pilot error or a technical fault were behind the crash, which killed all 55 passengers and seven crew members on board.