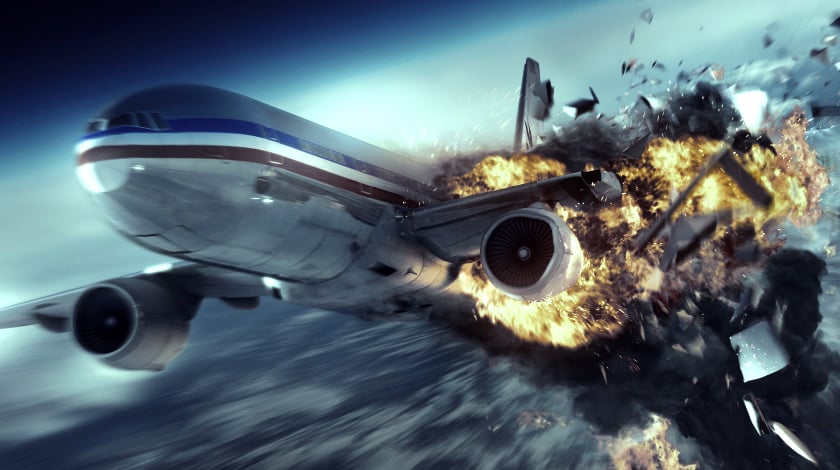 It is a generally known fact that flying is still the safest form of long distance travel. Last year 3,8 billion people flew safely on 40,4 million flights. Every year these numbers are increasing since there are more people who can afford to travel by air.

Unfortunately, the word “safest” does not mean that the aviation industry has no accidents and innocent people do not die anymore. Every year we can hear about deadly flights of the aircraft that carried more than 100 people aboard.

Recently, the International Air Transport Association (IATA), has released data for the 2016 safety performance of the commercial airline industry. According to IATA, the major jet accident rate in 2016 was 0.39 hull losses per 1 million flights, which was the equivalent of one major accident for every 2.56 million flights. However, all these numbers were overshadowed by 10 fatal accidents and 268 dead people.

This time we will overview 10 commercial plane crashes which took place in 2016.

The European mail and express freight carrier West Atlantic was enroute from Oslo to Tromso, Norway. The aircraft carried 4.5 tonnes of mail.

Approximately 30 minutes after take-off, the pilots declared mayday and the aircraft disappeared from the radar. The distress call just contained the repeated words “Mayday”, there was no further information in the call.

Searchers discovered the crash site around four hours later in a remote mountainous region on the Swedish side of the border with Norway. From the small impact area, the aircraft appeared to have dived into the rocky terrain at a steep angle. Both pilots died.

The final report was published on 12 December 2016. Depending on the results, the accident was caused by insufficient operational prerequisites for the management of a failure in a redundant system.

Tara Air Flight 193 was a domestic passenger flight in Nepal, serving the route from Pokhara to Jomsom.  The DHC-6 Twin Otter plane went missing after the pilots failed to respond to air traffic control about 15 minutes after the flight took off from Pokhara airfield.

According to the Minister of Culture, Tourism and Civil Aviation of Nepal, the aircraft was found crashed in the jungle at Soli Ghoptebhir in the Myagdi District, northwest of Pokhara.

18 passengers (including 2 children) out of 20 were from Nepal, one passenger was from Hong Kong and another one was from Kuwait. The accident is still under investigation.

The Antonov AN-26 operated by True Aviation crashed 500 metres from Cox’s Bazar Airport in Bangladesh. An engine failed during take-off apparently leading directly to the cargo aeroplane, carrying 972 boxes containing shrimps, crashing while attempting to return.

The pilots of Antonov AN-26 reported mechanical troubles and were unable to maintain altitude. Three members of the flight crew died and one survivor was critically injured. The accident is still under investigation.

The Boeing 737-800 was enroute from Dubai to Rostov-on-Don when it missed the runway due to heavy rain. It led to plane crashing during aborted landing at Rostov-on-Don airport.

During the second landing approach, the crew decided to abort it and initiate another go around at the height of 220 meters. After the aircraft climbed to about 1000 meters, it began a rapid descent and attempts to recover control were not sufficient. The collision with ground occurred at the speed of 600 km/h.

All 62 people on board the plane died after it hit the ground and broke into pieces.

18 May – Silk Way Airlines AN-12 crashes in Afghanistan

The Silk Way Airlines Antonov AN-12 cargo plane enroute to Turkmenistan crashed after an engine failure shortly after taking off from Dwyer Airport in southern Afghanistan.

The crash took the lives of 9 people: citizens of Ukraine, one citizen of Uzbekistan and six citizens of Azerbaijan. Two crew members survived.

According to the director of the State Administration of Civil Aviation of Azerbaijan, Arif Mammadov, the initial version of the cause of the accident is an obstacle that the aircraft encountered during take-off.

19 May – Egypt Air Flight 804 crashes into the Mediterranean Sea

It was an international passenger flight from Paris Charles de Gaulle Airport to Cairo. There were 66 people on board: 56 passengers, 7 aircrew and 3 security personnel. Among the passengers were 30 Egyptians, 15 French, 2 Iraqis, and at least one passenger from each of these countries: UK, Belgium, Kuwait, Saudi Arabia, Sudan, Chad, Portugal, Algeria and Canada.

The flight MS804 lost contact with radar when it was at 37, 000 feet and disappeared 80 miles before entering Egyptian airspace. No mayday call was received by air traffic control.

Four weeks after, Egypt Air confirmed that Greek authorities found some parts of the aeroplane. Debris from the plane was found in the Mediterranean Sea 290 km north of Alexandria. No survivors were found.

The flight data recorder indicated there was smoke on board the aircraft. The pilot told the air traffic controller about the smoke and decided to make an emergency descent and depressurize the cabin to try to clear the fumes. The accident is still under investigation.

The flight EK521 took off from Trivandrum International Airport and nearly 3,000-kilometer (1,860 mile) flight to Dubai was smooth.

According to the Preliminary Accident Report, significant wind shear was impacting the aircraft’s airspeed through the late final approach. The aircraft first impacted with the underside of its rear fuselage and skidded about 800 meters.

There were 300 passengers on board. All the passengers survived, but, unfortunately, the explosion of the aircraft’s center fuel tank took the life of a firefighter. 24 passengers were injured.

On 20 November 2016 GCAA said that the investigation might continue until 2019.

A chartered plane with a Brazilian first division football team crashed near Medellin on 28 November 2016.

According to the preliminary report, several decisions of the flight crew were incompatible with aviation regulations. Insufficient flight planning (disregarding necessary fuel stops) and not declaring an emergency when the fuel neared exhaustion caused the crash.

The flight attendant who survived the accident reported that the captain’s final words were: “there is no fuel”. Shortly after the crash, the person leading the investigation stated that there was “no evidence of fuel in the aircraft” and the plane did not catch fire when it crashed.

7 people were rescued alive, however the rest 71 occupants died.

Pakistan International Airlines Flight 661 was a domestic passenger flight from Chitral to Islamabad carrying 47 passengers. The aircraft involved in the accident was an ATR 42-500.

The crew declared emergency reporting problems with the left engine. Radio and radar contact was lost. Witnesses told that “the aircraft crashed in a mountainous area, and before it hit the ground it was on fire”.

The initial accident report released by the Pakistan Civil Aviation Authority (PCAA) revealed that the aircraft’s left engine malfunctioned at an altitude of 13,375 feet (4,077 m) and exploded, damaging the left wing, which was followed by a rapid uncontrolled descent and the disappearance of the aircraft from ground radar. All 47 passengers on board the plane died.

An Aerosucre Colombia’s Boeing 727-200, performing a freight flight from Puerto Carreno to Bogota (Colombia) with 6 crew members on board, did not become airborne.

While taking off from Puerto Carrena’s runway the Boeing 727 broke through the airport’s perimeter fences, became airborne, lost height again about 3 minutes later, impacted ground and burst into flames. Two passengers were rescued alive; four died on scene and one of the initial survivors succumbed to the injuries in hospital. The accident is still under investigation.